Ramadan is the holiest month of the Islamic religion. The way the Islamic calendar is set out means it falls slightly earlier each year in the Gregorian Calendar. For example, in the earlier part of the last decade, it coincided with Christmas. In 2017 it was 27th May to 24th June. For 2018, it’s not even halfway through the western year’s calendar and begins on the 16th May.

Ramadan is a month on the Islamic calendar; the word comes from the Arabic word Ramida or Ar-Ramad both of which mean “dryness” or “scorching heat”. It’s the ninth month in the calendar and considered the holy month as it is in this month that Muhammed received the First Revelation from God (or Allah). The length of Ramadan depends on the phases of the moon – although not by a great deal – usually 29 or 30 days.

The month preceding Ramadan is Shaaban – a month in which many Muslims begin to prepare for the holy month. Some people even begin fasting here. 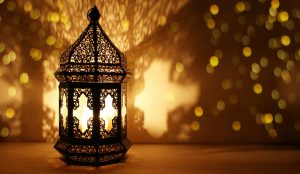 What is Expected of Muslims at Ramadan?

Most people know that Muslims are expected to engage in obligatory fasting through Ramadan. That means they must only eat and drink during the hours of darkness. During daylight, they are not permitted to consume anything. There are exceptions: sick people, the elderly, pregnant and breastfeeding women are not required to do so. An exception is also made for menstruating women. But fasting is not the only requirement.

• Giving alms to the poor – known as “zakat” (as a religious obligation based on earnings and material wealth – more like a tithe, it is not considered charity) or “sadaqah” (charitable giving to the needy, especially the poor)
• Reading and understanding the teachings of the Quran
• Acts of piety such as abstaining from doing bad things, remaining a humble person
• Observing Laylat al-Qadr which takes place on one of the last ten nights of Ramadan and is said to be when Allah revealed the first passages of the Quran. English translations vary and disagree but tend to be “Night of Power”, “Night of Decree” and similar variations

Sunni Muslims have an extra obligation. They are expected to engage in a special type of prayer called Tarawin. The aim is to attempt a complete recitation of the Koran.

Ramadan is a Celebration Too

While this all may seem stoic and serious, we should not forget that Muslims also celebrate Ramadan and engage in merriment with good food and company of family. In many Muslim countries, town squares are decorated in colourful lights at night. Lanterns have become a great symbol of the month too. This is not a modern phenomenon but believed to have originated in Egypt during the reign of Caliph Al-Mu’izz li-Din Allah who reigned (in the Gregorian calendar) in the mid to late 10th century. People lit lanterns to celebrate his rule during Ramadan. That quickly caught on and both mosques and homes were lit up during the month of Ramadan.

It’s common for employers to pay employees a bonus in Muslim countries too. This bonus is called Tunjangan Hari Raya. In some countries such as Indonesia, parades take place similar to those we see at Chinese New Year. What is clear with some of these celebrations is that Ramadan has expanded outside of its Arab origins to become a global honouring of the birth of their religion.